After hunting various regions of Africa, Uganda was next on our list. This small country, located between the Congo Republic, Sudan, Kenya and Tanzania, is rich in habitat and possesses a healthy population of wild game. These characteristics, combined with a stable social situation, create an alluring hunting experience. I’m in agreement with Winston Churchill, this is ‘The Pearl of Africa.

Uganda it is not a typical hunting destination, since it does not hold a wide variety of game species in comparison to other regions of Africa. It does, however, host exotic animals like the East African sitatunga, Nile bushbuck, Nile buffalo, and Ugandan kob. Our main objective for this hunt was to harvest a sitatunga, an antelope that lives a solitary life in thick, swampy papyrus forests. Second, was the bushbuck. With many similarities to the roe deer I hunt at home, I felt a special attraction to this animal.

The main mode of transportation for this adventure was a handmade, wooden canoe called a ‘mokoro.’ There were no gas or electric motors mounted on these narrow, shallow boats, so we simply paddled to our hunting spot everyday. This method was the most advantageous, as it was less invasive and decreased the chance of spooking game. Overall, it gave the hunt a primeval sentiment. 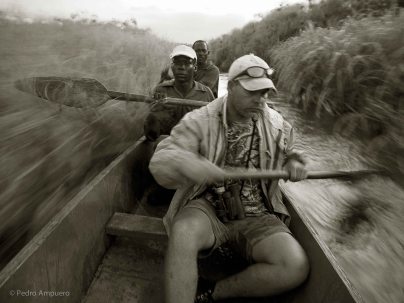 The adventure began with a sitatunga hunt. The sitatunga live in tall, dense papyrus forests on river basins, which forced us to hunt them from elevated stands called ‘serebeti.’ These stands gave us a solid view of the land and allowed us to spot game at a distance.

After several days with no shot opportunities, we awoke to rain. This was a relieving sight, as the bulls would be much more active in this weather. As the sun began to rise, we arrived at our serebeti, and spotted a sitatunga at a distance. It was a gorgeous bull, better than what I had ever hoped to see. My heart immediately began to pound. The bull slowly fed 200 yards away and didn’t look like it was going move any closer. We decided to attempt a stalk. After a slow and intense few minutes of lightly walking over the soaked ground, I was 55 yards away from him and managed to release an arrow. I will never forget watching my arrow’s fletching glide through the air, and how easily the bull ducked before the arrow hit home. The agility of this animal was above anything I have seen.

Every morning we would ride our mokoro, paddling through a seemingly endless network of channels until arriving at the hunting grounds. Flocks of birds soared above the glowing horizon as our paddles slowly broke the water. It was a beautiful way to start each day.

Part way through the hunt, and after many hours in the serebeti, we got a second chance on the same bull I had missed a few days prior. He was coming out to feed in a large burned area, but too far from the serebeti to loose an arrow, so again, our only chance was to pursue him on foot. Stalking over spongy ground and constantly stepping on floating papyrus roots can be extremely difficult. The papyrus floor is riddled with holes that are masked by a tangle of unsupported roots, and if you step on them you’ll likely fall up to your waist in water. To top it off, from ground level you can only see the tips of horns as you approach, so finding a clear shooting window is a complex task. The stalk was crazy and seemed impossible but it was our only option. What a challenge!

During my stalk, I spooked a female, and the opportunity seemed foiled. Luckily, as the bull trotted away, he stopped for one last look in a small opening. I quickly found a gap in the vegetation and managed to thread an arrow, dropping the bull in his tracks. This was truly a dream come true! I felt so fortunate to swiftly kill this elusive animal on such adverse terrain.

The sitatunga has adapted perfectly to thrive in these swamps. Since they live in ground that mainly consists of floating papyrus roots, they have a peculiar hoof shape. The larger surface area of the hoof prevents it from breaking through the soaked ground. It’s amazing to watch them effectively navigate, run and swim through this inhospitable habitat. To escape danger, a sitatunga will submerge its entire body while leaving its nostrils slightly above the water’s surface. This is simply an incredible animal. 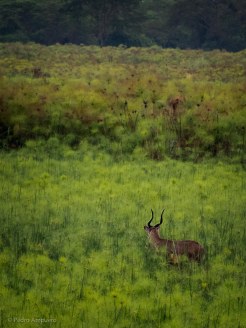 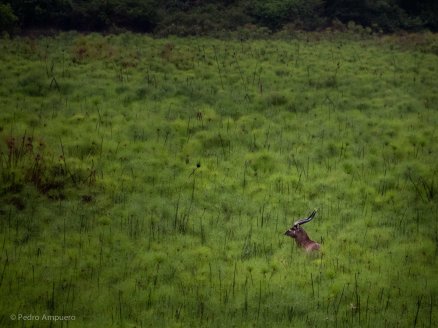 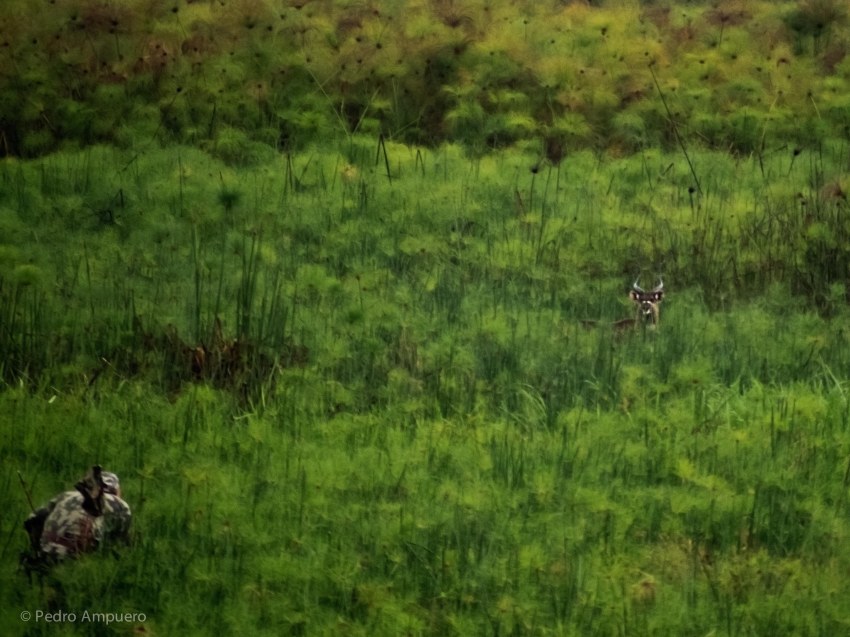 The terrain in Uganda is great for bow hunting, with soft grass and adequate cover, while having enough clearance to see game at a distance. Although a hunter can see quite far in the forest, animals seemed to disappear into thin air. Thankfully, my guide understood the difficulty of harvesting a trophy with a bow. So after we found an animal and decided it was mature enough to harvest, he would stay back as I stalked in. This made our partnership and each stalk much more effective. 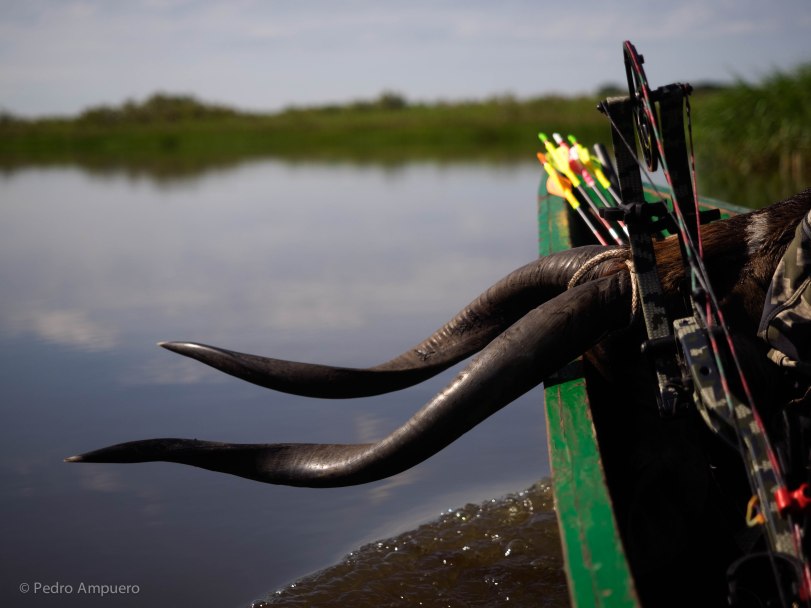 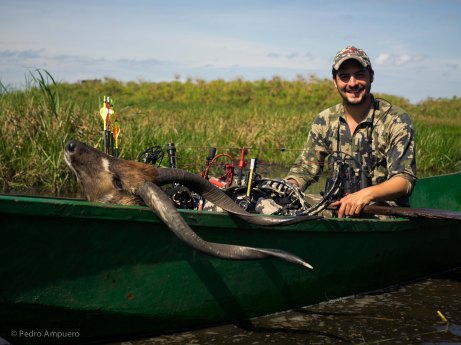 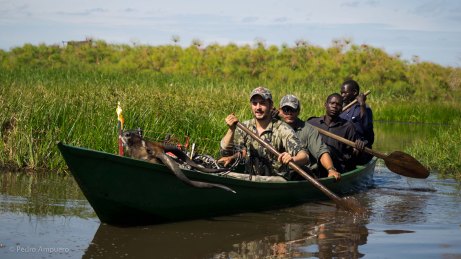 After harvesting the sitatunga, I focused my efforts on bushbuck. The bushbuck has been described as the African version of roe deer. Both possess similar behaviors, habits, physical characteristics, and even create the same barking sound. This was the first spring that I was not hunting roe deer in Spain, and I was missing it. It felt awesome to be stalking a creature that is akin to roe deer in so many ways.

A bushbuck hunt mainly consists of spot and stalk. If they sense the slightest danger, they have an uncanny ability to disappear like a ghost. Typically, they will hunker down in the thickest bush, wait for you to move, and then bolt out from the other side. They call them bushbucks for good reason!

Although this is not the most sought after trophy in Africa, it is one of my favorites. It was amazing to be hunting a distant species in terrain that is so different from Spain, but at the core it felt like I was hunting roe deer at home. Getting within 45 yards of this ellusive and gorgeous creature, and then capitalizing on my opportunity was a very special accomplishment. I couldn’t be more grateful for the experience. 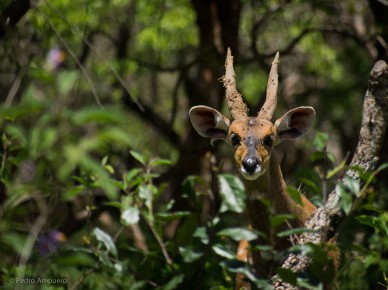 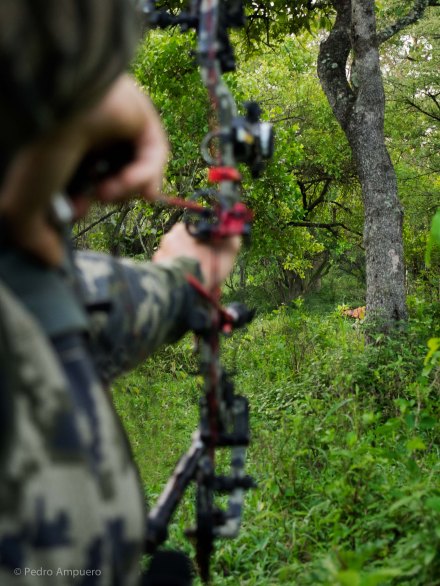 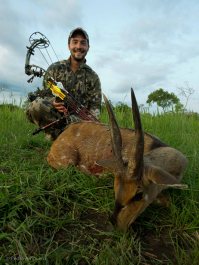 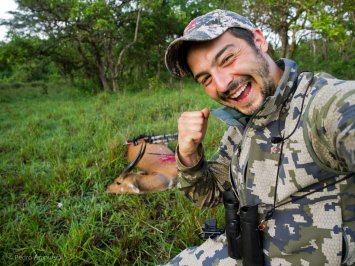 Uganda has been involved in conflicts with the Lord’s Resistance Army in the northern part of the country up until the past decade. This rebel group, led by Joseph Kony, is one of the most cruel in history and has been blamed for numerous atrocities, including the use of thousands of child soldiers. The violence has decreased recently, and we felt safe and comfortable during the entire trip. Despite its dark past, happiness is ever present among Uganda’s people.

An officer accompanied us from the Uganda Wildlife Authority, the organization that manages natural resources of the nation. He oversaw each harvest and reported relevant information to the government. Additionally, he was with us to prevent and seek out poachers, hence the AK-47 he sported at all times. Much to our relief, there were no incidences where we needed the weapon.

Aside from the bushbuck and sitatunga, I had the opportunity to chase some of Africa’s smaller antelope species, the oribi and duiker. Oribi are typically accompanied by several females, and they prefer open ground, which makes stalking them a challenge. In addition, they are a relatively small antelope, so there is nothing simple about getting close or shooting them. Surprisingly, I was able to connect on this nice male at 60 yards.

Since my first hunting trip to Africa, nearly 15 years ago, I have been harvesting duikers. After hunting them in many different ways and places, I have developed a high respect for them. The bush duiker is a species that does not respond well to calling, so spot and stalk hunting is the only option. However, spotting a creature this tiny in thick vegetation is a tall order, and if offered a shot you’d better shoot quick since they are typically not stationary for long.

“One of the things us Spaniards are known for is our love of pork, it’s deeply woven into our culture, so for us hunting warthog is a blast! If the wind is right, these animals offer some good stalk opportunities and they are most active during the warmest hours of the day, when most other animals are bedded down. Because the warthog is not an attractive animal, it is surprising that compared to other pigs its meat is excellent. On a hunt like this, shooting a young boar to feed camp is a mainstay on the duty list. Every night, we would feast on the hog’s white meat, enjoying every bite.” 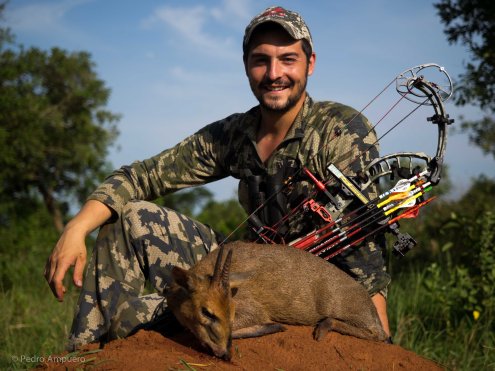 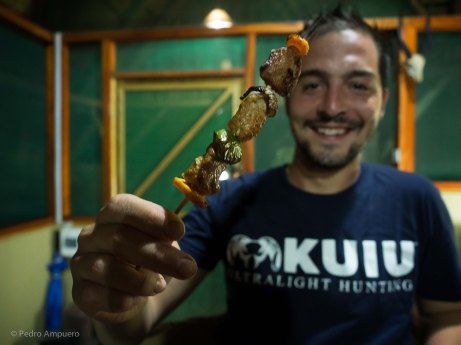 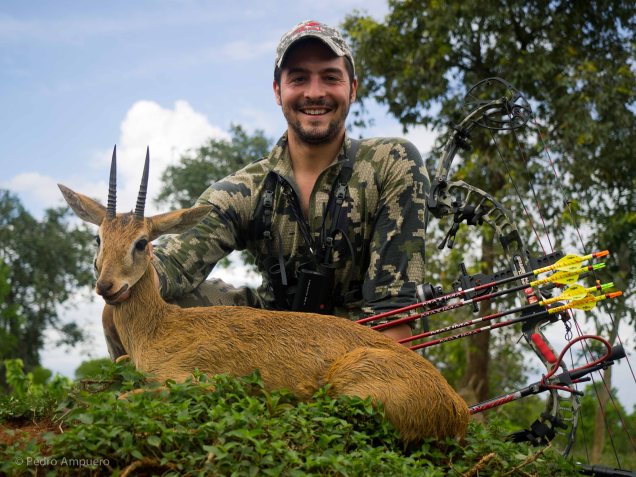 During the last few days of the the hunt, we moved our camp to an area near the boarder of Congo, on the Nile River. This new terrain was more open with scattered bushes, which made spot and stalk hunting much easier. Our hopes were high. On this day, we targeted the Ugandan kob, an iconic game animal of the region who lives in larger herds consisting of one dominant buck and around a dozen does. Though this terrain was more fit for hunting, the herds of kob were extremely difficult to stalk in on due to many keen eyes. After several failed stalk attempts, I was able to connect on a really nice buck. It was the perfect way to cap our hunt in Uganda, and the butterfly on the kob’s left horn was an appropriate symbol of our good fortune!

After the kob hunt, we took some time off to visit Murchison Falls, where the massive Nile River passes through a narrow channel just a few yards wide. Amazingly, an average of 300 cubic meters per second (11,000 ft³/s) of water surges over the cliff. It was an impressive sight.

While fishing, we were surrounded by hippos and crocodiles, reminding us that the Nile is far from hospitable with its dangerous inhabitants. It was an intimidating sight but a true spectacle to see such powerful creatures in the wild. 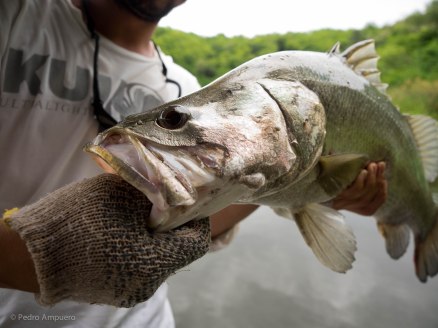 Overall, Uganda was a spectacular trip and one of our best safaris in Africa thus far. For me, a vital aspect of hunting is the discovery of new cultures, game animals, terrain and hunting territories. I couldn’t be more thankful to my Dad, who taught me the important ethics and values of hunting and has taken me on numerous adventures with him. Thank you all for following along and best of luck in the field this season! 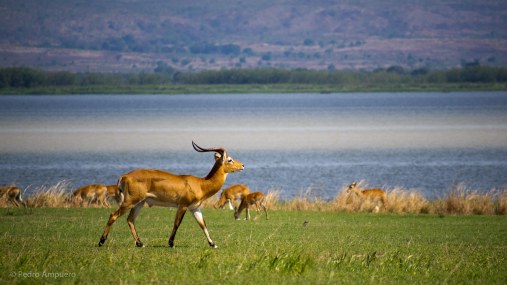 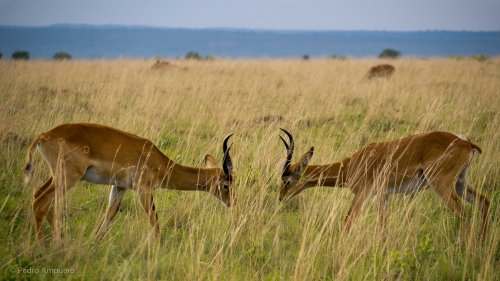 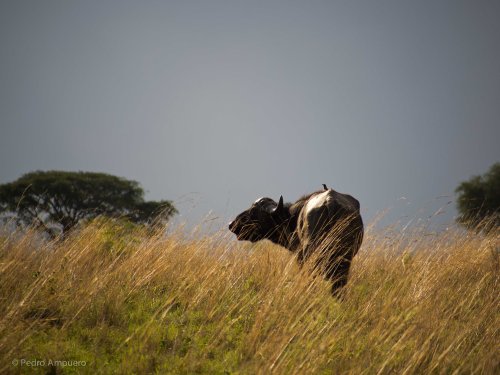 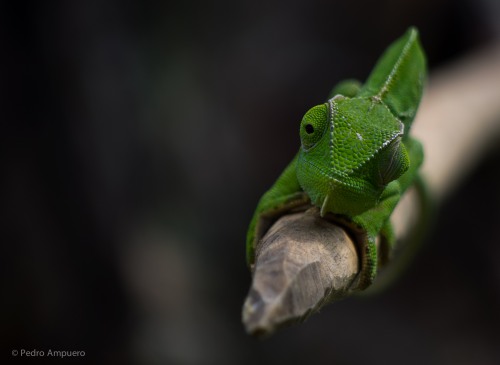